Buried at the Roadside

We live in a cruel world even now in the 21st century but at least we no longer leave those who have committed suicide, to be buried at the roadside. A law passed by King Athelstan in the 10th Century preventing burials of suicides on consecrated ground, remained in force for around nine hundred years. But even then, the new act in 1823 stated that burials of suicides could only take place at night and without

any Christian service. This barbaric law stood for almost sixty years until 1882 when such burials could take place in the daylight hours.

Buried at the roadside the horrifying truth

It is well known that murderers could not be interned in consecrated ground, but for those whose lives were in turmoil. The ignominy associated with suicide had far reaching effects on family and friends. The real horrifying truth in the 19th century, was the fact that not only were people buried at the roadside, but they were also staked through the heart. In the Georgian era in Ashton under Lyne the unfortunate people that committed suicide were staked through the heart and buried at the crossroad of Oldham Road and Old Street. 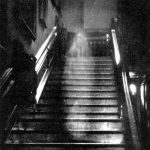 would also mean that if the spirit did rise, the essence became confused and would be unable to find its way home. Complicated superstition like this is traceable right back to early Christianity in England. When those trying to convert the local population incorporated pagan rituals into their teachings. Thus, reaffirming superstitions associated with all hallows eve and other pagan festivals, making people fearful of vengeful spirits.

Her name and life forgotten

There is a vague story associated with a burial at the roadside in Ashton under Lyne concerning the young servant girl of a local Doctor. In Doctor Ogden’s household was a girl left pregnant and spurned by her lover, in her despair she used poison to take her own life. Following the confirmation that she had committed suicide; this unfortunate young lady’s body was taken in the dead of night to the crossroad of Oldham Road and Old Street. There a grave was dug, and a stake driven through her heart, her body then buried at the roadside in an unmarked grave, her name and life forgotten. At that significant road junction in the town of Ashton 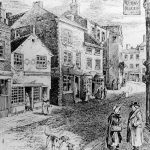 under Lyne, there could be many unfortunate unmarked graves.

Within sight of this crossroads was Ashton’s Gallows Field and those who found their way to this place are buried here. Each of these people suffered the same fate and had a stake through the heart before they were interned. So, the poor unfortunate girl shares her grave with the worst of that period’s society, in life a servant and in death, trapped with murderers and highway men. Being buried at the roadside could be seen as a fate worse than death.

A memorial to unknown souls

In an enlightened society, we now know that those who commit suicide are victims, not criminals and should not be buried by the roadside. In recent years we have remembered those we lost in World War One even though they were shot by their own side. Like those victims of 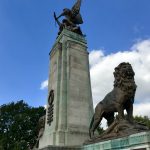 our ignorance to mental health, these unknown souls should be remembered, here in Ashton under Lyne and across the United Kingdom. For those that believe in a god and an afterlife, a memorial to the lost will to some see the release of these troubled spirits  buried at the roadside and allow them to rest in peace. For those that have no such belief, it can be seen as a last act of kindness in a world that is not always kind to its inhabitants. If you have any comments or additions you would like to see in this Blog, please get in touch with us.

This entry was written by Stetat, posted on December 6, 2021 at 9:53 am, filed under Ashton under Lyne. Bookmark the permalink. Follow any comments here with the RSS feed for this post. Post a comment or leave a trackback: Trackback URL.