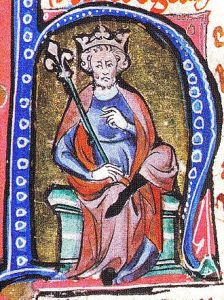 Hartshead Pike Ashton under Lyne is the hill itself, which has a stone tower at its summit. Before we explore the history of the tower that sits atop of this hill, the history of the summit itself has a great deal to offer. It has been suggested that the original stone monument at the summit of Hartshead Pike was in fact. A tribute to King Knut (Canute) of England who is reputed to have visited the area in the 11th Century. Locally there is other evidence to support this theory, with areas named Knott Lanes and Knott Hill. Knott Hill is in fact overlooked by Hartshead pike and so ideal for a monument to a King, one who brought a golden age to England. King Knut reigned over England from 1016 to 1035, bringing law, stability, and prosperity to our shores.

The name Hartshead comes from the Scandinavian, herteshevet meaning hill of deer or stag; pike being an Old English word for peak. Put into context the full meaning being the peak of the hill of deer. If only language was simple, but this is a mixture of Anglo Saxon and Viking. Clearly though Hartshead Pike Ashton under Lyne has been there a great deal longer than the 11th Century. Recorded history states that prior to the 5th Century, Hartshead Pike was the site of a Roman Beacon. As it was visible from a few local Roman Roads. The Roman Road that ran from Manchester to Tadcaster; and on the opposite side, the road or street that ran through Carbrook Stalybridge. Before that, the local Druids may have performed rituals at the top of this peak that looks over the valley containing Manchester. The Romans often re-used religious and sacred sites as beacons, shrines and or fortifications.

Moving forward over 1300 years from a Roman Beacon, the first modern structure was built at the top of Hartshead Pike Ashton under Lyne. In the Early part of the 18th Century a tower was constructed with timber beams, with lath and plaster walls. At this point is the moment in history when Hartshead Pike, became known more for the construction at its summit, than the hill itself. This first tower though did not stand the test of time as it is reported as vandalised in 1750. Reports from the time state that anyone caught vandalising Hartshead Pike will pay a fine of 3s 4d or £118 in 2020. The fine at the time was substantial as the average labourer earned only 8 shillings per week.

A Warning to Vandals

1751 brought the construction of a new tower in stone to replace the wooden structure that was so poorly treated by the local community.

The structure was a much smaller version of the tower that exists now, which had a weathervane on top. There was an inscription carved into this stone folly, which read “Look at me well before you go and see you nothing at me throw”. The new tower casting a watchful eye over Ashton under Lyne and beyond collapsed before the end of the 18th Century. It is reported that a crack of nearly half a metre appeared at the base of the building, not long after it lay in ruins. The second tower remained a ruin for almost seventy years as the Industrial Revolution transformed the local area. Soon Hartshead Pike Ashton under Lyne was surrounded by dark mills, that covered the Northwest of England with soot and grime. Even if the structure had been there, would anyone have been able to see it clearly at the time; in a world blotted out by choking smog.

It was not until 1863 that construction of a new tower was started, the land that the Pike stands on was then owned by the Earl of Stamford. George Harry Booth-Grey 7th Earl of Stamford donated the land to the town of Ashton under Lyne, and the stone to build the new monument. His generosity to the local Stalybridge and Ashton under Lyne communities was well known at the time. Before his death he also donated what is now Stamford Park to the people of those communities. The third tower at the top of Hartshead Pike Ashton under Lyne was built to commemorate a royal wedding. It was the marriage of HRH Albert Edward, Prince of Wales, and HRH Princess Alexandra of Denmark 10th March 1863. They had been introduced in 1862 by the Prince’s older sister Victoria Princess Royal. 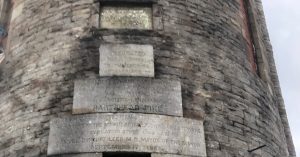 When the new tower was opened 17th September 1863, there were placed on it four inscriptions in stone. The stone from the second tower which had the previously mention inscription and below it, “This Pike was rebuilt by public contribution Anno Domini 1751”. I can only assume that the inclusion of this inscription was included in the new tower to satisfy the vanity of the local people, who were responsible for the building of the second structure. The other carved stones celebrate the previously mentioned royal wedding, the donation by the Earl of Stamford and the laying of a foundation stone by the then Mayor of Ashton under Lyne.

My only issue with one of the inscriptions is the fact that it refers to the tower as a restoration of an ancient monument. From the written history of Hartshead Pike Ashton under Lyne, the towers that were built were far from being ancient. The only monument that that would fit the bill, would be the stone that commemorated the visit of King Knut, over 800 years earlier. If that stone had been incorporated into the building of Hartshead Pike Tower, then it could be claimed to be an ancient monument.

The architect that designed the present structure could though be rightly proud of his achievement, as to date the Tower known as Hartshead Pike Ashton under Lyne. Has been standing for 157 years, the architect was in fact John Eaton, born in Scotland in 1810. John Eaton moved from Brechin, Scotland in 1839 to a house on Church Street Ashton under Lyne; he was responsible for designing several buildings locally. He died in 1876 as did his architectural practice, at the height of his building career, John Eaton employed 44 men.

After the Pike opened in 1863 it became a local tourist attraction, many walkers climbed to the summit to visit the tower. For many years, 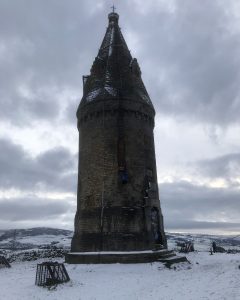 the structure contained a shop selling refreshments and gifts, for a small fee, visitors could climb to the top via the internal staircase. There you could look out of the windows and see far and wide across the local landscape. If you take the time to walk to the top of Hartshead Pike Ashton under Lyne, on a clear day you can take in the magnificent views. To the east the Pennines, to the west, Wales and to the north Pendle Hill. For the more adventurous, the climb on a mountain bike can be a challenge from the Ashton under Lyne side.

The Pike at Night

A walk to the summit at night can be just as rewarding as in the daytime, the lights of Manchester twinkle in the distance. Although the structure itself becomes dark and forbidding or maybe the ground holds long memories of druidic activity. Hartshead Pike is visited by groups at Halloween, who enjoy the atmosphere and the sense of the macabre. What is odd is the fact that there are few ghost stories associated with Hartshead Pike, the only one to be found dates to 2006. Two walkers close to the summit of the hill claim to have seen a pale grey man, dressed in 1960s attire. They walked past the old man and when they turned to look back at him, he had vanished. Was the old man a wandering spirit or just a local on his way to a fancy-dress party? 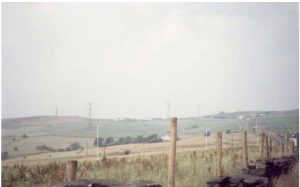 Hartshead Pike Ashton under Lyne is a familiar local landmark, neglect of this structure is an embarrassment to the communities of Ashton under Lyne and Mossley. Towers and follies like this are used in other places, some having zip slides or are open to the public. A report by Councillor Ryan of Tameside Council states that the Tower is in urgent need of repair, externally and internally. The lantern at the top of the Pike has already been removed at a cost of £23,000. For the lantern to be reinstated as part of the refurbishment, will cost the local council £30,000 with the required repointing. The total bill to make the structure of Hartshead Pike Ashton under Lyne safe, is believed to be around £61,000.

The cost of bringing this local monument to its former glory is unknown and under the present circumstances unlikely. It will probably be many years if ever, before this old stone tower will be open to the public again. Very few will climb the internal stone spiral staircase or look out of its windows at the commanding views. How many Councillors have come and gone in the last century without a thought to the fate of Hartshead Pike! A century ago, it was used as a drunk tank by the local constabulary and before that a place to walk too on a summer’s day. I can tell you that a walk to the top of Hartshead Pike Ashton under Lyne is a rewarding experience. There is no doubt that it is worth the time and effort, the view alone is something to be enjoyed.

Our gratitude as always for the images provided by the Tameside Image Archive.

This entry was written by Stetat, posted on November 27, 2020 at 3:36 pm, filed under A different Direction, Ashton under Lyne, Uncategorized. Bookmark the permalink. Follow any comments here with the RSS feed for this post. Post a comment or leave a trackback: Trackback URL.