When you add to this, very poor sanitation and you have a recipe for disaster for the working class people of the town. When Spanish flu in Ashton under Lyne started during the pandemic of 1918 which killed between 20 and 50 million people worldwide; and 228,000 in Great Britain. It was not taken seriously by the area’s Medical Officer of Health, he believed that the normal rules applied. People with a fever were told to confine themselves to bed and take an aperient (laxative). While at the same time living on a diet of hot slops, this being unappetising wet food or soup. Probably the best way to describe slops in a modern sense, is what we now feed to pigs. 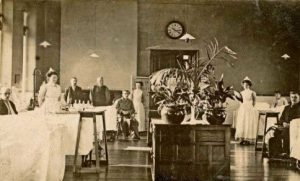 Other advice from Ashton’s leading medical man on Spanish Flu included more sensibly keeping a clean home; but also ensuring that children got plenty of fresh air. Sadly for a small proportion of the local population this did not work; and twenty four people died from mainly pneumonia after succumbing to Spanish Flu. An event that maybe prevented further deaths in the town was the fact that at its height it was wakes week in Ashton under Lyne. So for those that could afford it, the possibility of a holiday was on the table and; escape from the doom and gloom.

History records that at the start of Wakes Week in July 1918, over 2000 people boarded special trains from Ashton-under-Lyne’s Charlestown Station. Then headed off for Southport or Blackpool for a week’s holiday. Oddly enough Southport is still one of 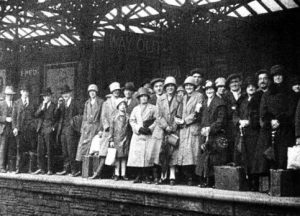 those destinations you can get a direct train to in 2020. After this exodus from the town, Spanish Flu abated and life returned to normal for the folk of this once industrial giant. A week staying in guest houses and hotels with better sanitation than was the norm locally; may have done the trick. Although our town’s Medical Officer believed some heavy rain would prevent the Spanish Flu from taking hold locally; and he did get his wish.

Moving on and over a century later another pandemic is upon us and although not as dangerous as Spanish Flu; nevertheless we should listen to the advice of our leading experts. The least you can say is the fact they are not going to advise us to eat slops, although if your appetite is a bit poor; soup is always a good option. So far Tameside has only seen one death at the time of writing this piece, a resident from our neighbouring town of Stalybridge. We hope that our entire community gets through this outbreak and we don’t repeat the tragedy of 1918 and lose anyone else.

We must thank the Tameside Image Archive for providng us with more historical iamges of our local area and reccomend a visit to their fascinating Website; please follow the link.

This entry was written by Stetat, posted on March 17, 2020 at 4:36 pm, filed under Uncategorized. Bookmark the permalink. Follow any comments here with the RSS feed for this post. Post a comment or leave a trackback: Trackback URL.