The Great War the Beginning of the End

By 1918 Ashton under Lyne had lost over 1500 men in The Great War, each life lost is its own tragedy. Families lost Fathers, Sons, Husbands and Brothers in a terrible conflict that was named the war to end all wars by the author H G Wells. As it turned out the human race have not shaken off its capacity for conflict even a century later.

The War Memorial in Ashton under Lyne has a total of 1814 names forged in bronze, 1514 of those names died in World War One; nearly 3.5% of the total population at the time. But if you compare the 1911 census with the 1921 census; Ashton under Lyne lost around 15% of its male population who were of a fighting age.  I hope this year that all that can, attend the laying of the Wreaths across the United Kingdom, to remember their fallen relatives.

If you read our last Blog on the Great War, you will be aware that on the 21st March 1918 the German Army attacked British positions on Manchester Hill. This attack was the first of many between March and July 1918, the intension being a decisive set of operations to punch a hole in the allied trench lines. Despite making ground and winning some victories; the end result was little more than had been achieved by either side in so many futile attacks on embedded trench positions.

The Great War the Beginning of the End New Thinking

Trench warfare had taken many lives over the years of this conflict, of those that lost their lives; it is estimated that 250,000 of them are still where they fell in battle. The fallen lie beneath the earth, no stone to mark their graves; but honour flows within the ground that holds their memory. New thinking to prevent further losses on this scale was needed and the man who became General Sir John Monash had the answers.

General John Monash commanded the Australian Army and 50,000 American troops, a total of 208,000 men at his disposal. His view though on infantry was different to that of many other commanders during the First World War; he certainly didn’t believe that they should die in heroic charges countered by machine gun and heavy weapons fire. His belief was they should be protected by Tanks and air support, so they could make progress across the battlefield. 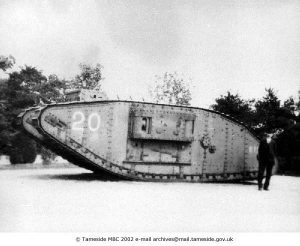 This hero commander on the Western Front came up with the plans to use Tanks on a large scale for the first time to advance with the troops; with air support added to artillery fire to pin down the German defenders. His strategies were used at the Battles during the 100 day offensive to punch a hole in the German lines following the successes of Ferdinand Foch at the second Battle of Marne. The strategies of the leading protagonists of the Allied forces came together, they were John Monash, Ferdinand Foch, Field Marshal Sir Douglas Haig and General Sir Henry Rawlinson.

The Great War the Beginning of the End August 1918

The strategies and plans for the 100 day offensive came together at the end of July 1918, with Henry Rawlinson submitting the plans of John Monash to Sir Douglas Haig. Following this the plans were presented to the supreme commander of the allied forces, the Frenchman Ferdinand Foch. It was originally decided that the Allied forces would attack 10th August 1918 North of the Somme.

The attack actually took place on the 8th August 1918; the attack on the German positions being a total surprise to them. This was due to the fact that the allies did not on this occasion begin by shelling the German trenches and the allies had referred to this offensive as a raid to play it down , even with their own troops. The German Commander General Erich Ludendorff 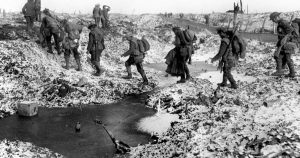 On the first day of the Battle of Amiens, over 30,000 German Troops fell in battle and around 16,000 were captured. Although this could not be foreseen at this point by either German or Allied commanders the beginning of the end of the Great War had started; and by October 5th, 1918 the war was effectively over, with German on the verge of surrender. It is worth noting that having spent just over four years losing hundreds of thousands of men for tens of metres of ground; on this day alone one battalion advanced 13km.

The Great War the Beginning of the End George Dickinson

On the 8th August 1918 George Dickinson was one of the men that fought on that significant day. Another brave man from Ashton under Lyne who had already survived the Battle of Ypres in 1917; and was one of the Cadre left after the Manchester Regiments defence of Manchester Hill on the 21st March 1918. At this point George had only been married to his sweetheart Ethel Dean for a mere 21 months; as they had tied the knot on 16th November 1916 at the Albion Church Ashton under Lyne.

For men like George, the first day of the battle of Amiens must have been a revelation, experiencing for the first time protection from tanks and aircraft. During the advance at Amiens over 500 tanks were used across the battlefront with support from the newly formed royal Air Force playing their part.

This must have been in stark contrast the George’s previous engagements at Passchendaele and Manchester Hill. In October 1917 George with his Manchester Regiment comrades was part of the failed attack on Poelcapelle; where rain and shelling turned the battlefield into a sea of mud. The horrors that George and the Manchester’s witnessed here were gruesome, a battlefield littered with the bodies of fallen pals; and where many wounded drowned in shell holes during the heavy rain fall.

Then only months later to lose many more on Manchester Hill to a German onslaught that killed their commanding officer and almost turned the tide of the war in favour of the German Army. You can only consider in awe the bravery of George Dickinson and all those that fought in this most horrific of conflicts. All the men whose names are carved in stone on war memorials across Europe and here in Ashton under Lyne.

George sadly did not survive to the end of the conflict as he was killed in battle 30th August 1918; leaving all his worldly goods to his Wife Ethel. George was killed during the Battle of Amiens at Riencourt, his grave was never found. His name can be found on the Ashton under Lyne War memorial and on panel 9 of the Vis en Artois Memorial Pas De Calais, France. There are nearly 10,000 names on this memorial alone and they like all the men who died in this conflict should never be forgotten; no matter which side they fought for.

The Great War the Beginning of the End a Final Thought

It is difficult to research a Blog such as this without feeling the loss and futility of war and in particular the terrible loss during WW1. All those men listed on the War Memorials across Tameside must mean that every family member alive today owes them a debt of gratitude. Their sacrifice and bravery will be celebrated at the centenary this year 2018, and I hope that our words will cement what they have given to all of us.

Whatever you have planned for Armistice Day on the 11th November, please take a few minutes to remember your family members who gave their all a century ago. Two minutes of silence out of a day that contains 1440 minutes is a small thing to give; to remember the conflict known as the Great War that claimed over eight million lives on the battlefield alone on all sides.

They shall grow not old, as we that are left grow old:

Age shall not weary them, nor the years condemn.

At the going down of the sun and in the morning,

We will remember them.

As always we must express our thanks to the Tameside Image Archive for providing some of the photographs contained in this Blog.

This entry was written by Stetat, posted on September 6, 2018 at 8:24 am, filed under Ashton under Lyne. Bookmark the permalink. Follow any comments here with the RSS feed for this post. Post a comment or leave a trackback: Trackback URL.